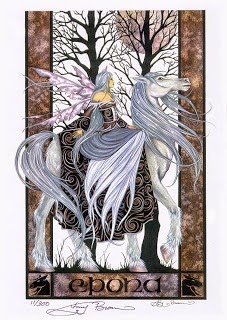 Eponalia is the feast day of the ancient Celtic Horse Goddess, Epona. The word ‘pony’ is derived from her name. Ancient peoples from the west of Ireland, to as far east as Anatolia (Turkey), from the Danube River to Yugoslavia, down to Rome and even North Africa, worshipped the Horse Goddess.  Her Facebook fan page would have broken world records.

The ancient Celts had totem animals, much like Native Americans.  The horse, and the white horse in particular, was a powerful totem, symbolising the land and journeying (both physical and spiritual). It was believed that the Horse Goddess could help humans transcend the limitations of mortality. 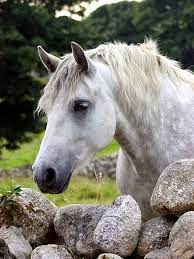 Today, Ireland is definitely horse country. When you visit the west country, you’ll undoubtedly see (and perhaps meet) lots of different breeds, from Thoroughbred racehorses to sturdy Cobs, and everything in between. But the most prevalent by far is the native Connemara pony. More of a horse than a pony, the Connemara is a cross between the original very small Irish horses referred to as ‘Hobby’ and the Arabians and Andalusians that came to Ireland with the Spanish Armada in the 16th Century. The Connemara pony is hardy, intelligent and good-tempered—much like the rest of Ireland!