Daughters of the Night Sky 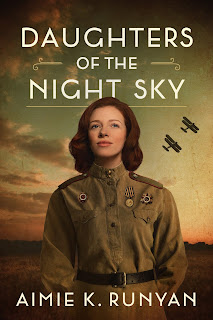 Daughters of the Night Sky is Aimie Runyan's fourth novel. It's a tale of wartime valor about a group of Russian female pilots (and one in particular) who fought the Nazis during WWII. Here, Aimie tells us about the birth of this facsinating story.

F: When/How did you find out about these pilots? What inspired you to write about them?

A: I found these women by happy accident. I was hunting to shift away from the 17th century as my focus of research, and a lot of my critique partners and colleagues knew I was on the quest for the Next Big Idea as I finished up edits on my second book, Duty to the Crown. There was an article circulating on Facebook commemorating these women (I believe the last of them may have passed away, which sparked the post.) I had multiple friends send it to me with notes saying “this is what you do! Write this book!!!” and so I filed it away until it was time to start up the next project. When I was discussing the options with my agent, it was the idea that really stuck with us.

F: Did you travel to do research? If so, where did you go? If not, how did you research this story?

A: I got to go to Seattle to the Flying Heritage Collection to see an actual Polikarpov PO-2 which is the plane the women flew in combat. These machines were built in the late 20s and made from wood and linen. Open cockpit. Just about as sophisticated a machine as your average lawnmower. But they were flying at hundreds of meters up in the air in sub-zero temperatures. I wouldn’t trust my lawnmower with that job. It was fabulous to see the plane in person and to get a sense of its history. Sadly, it wasn’t flying that day, so I found a local pilot who owns a WWII era open cockpit biplane—somewhat fancier than the Polikarpov, but not much—and paid for a joyride. It was one of the highlights of my research career. Apart from that, my research was very traditional. Lots of library texts, Youtube videos, Google Maps, and beating my head against a wall. I DID have the chance to spend some time in Alaska several years ago, and used that as the basis for my descriptions of the Russian countryside. I’ve been told by people in the know, that it was a very good analogy. 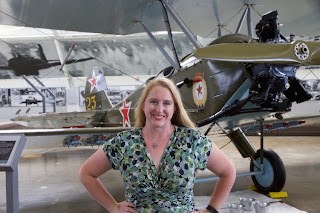 F: I love the cover image. Did you have any part in choosing that?

A: A bit. Because the cover is pieced together from bits of various photographs, I got to weigh in on the model herself, the uniform, the planes, the background, the fonts, etc. We tweaked her hair, changed the position of the planes, and things of that sort. It was fantastic to feel like I was part of the process, though the cover designer and the good folks at Lake Union are far better at design than I am! I think the end result is spectacular, if I do say so myself.

F: What’s a typical day like for you? Is it easy or a challenge to make time for writing?

A: I am the mother of two small children, so I’m not sure if any day really qualifies as “typical”. Right now I get to write for about 6 hours Mondays, Wednesdays, and Thursdays, with a little smattering of time on Tuesdays. That includes drafting new projects, editing, and promotion. I’d love to have 8-9 hours 5 days a week to write, but what I have is pretty great. Next school year I’ll get Tuesdays and Fridays back, though I’ll get probably more like 5.5 hours a day, but the consecutive writing days will be wonderful for momentum. The secret is to be focused on what I’m doing when I’m working on it. It’s easy to waste a lot of time wishing I was writing when I’m doing the dishes or worrying about the kids when I’m writing, but if I am present where i am, all those things get more attention in the long run.

F: Are you working on another project now? If so, can you tell us a bit about it?

A: Yes! I am finishing up the first draft of another historical, GIRLS ON THE LINE. It has to do with the women who were telephone operators in France during the first world war, and it has been such a joy to write. I can’t wait for you all to meet Ruby!!! 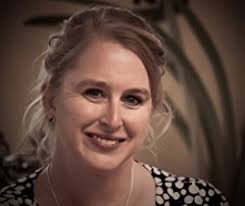 If you'd like to know more about Aimie, check out her website, here: http://www.aimiekrunyan.com/
Posted by Fiona Claire