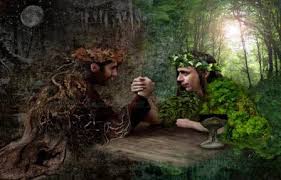 Back at the summer solstice, you may not have noticed it, but the King of the Oaks did battle with the Holly King, and lost. But don’t despair. On the Winter Solstice they’ll do battle again, and this time the Oak King will regain his rule. This, according to Irish legend, is why the seasons change.

The holly tree is a native evergreen that stands out at this time of year among leafless hedges and woods, growing from tumbling stone walls, flashing bright, shiny, red berries, and waxy dark green leaves. Those ‘berries’ are actually called ‘droops’ and contain multiple seeds. Only the female holly trees produce the red fruits. The waxy leaves hold water which helps them stay green throughout winter. And each leaf stays on the tree from between five and eight years. Though not a big tree, it’s rugged enough to withstand winter frosts and summer droughts. 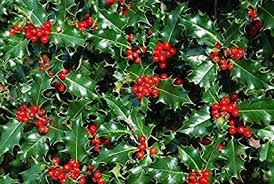 Ancient Brehon laws protected trees according to their particular value and utility. The holly tree, extremely valuable, was considered one of only five ‘Nobles of the Wood.’ It was believed to protect against lightning strikes, bring good luck, and enhance dreams.

It was used specifically in the shafts of chariots, but apart from its value to people, it’s great for birds and wildlife, and the tightly packed boughs give shelter to song birds.

In Ireland, it has always been considered a cheerful tree, joyfully flourishing even on harsh, barren land, and when the natural world has gone quiet in winter. To the ancient druids it was esteemed as a symbol of continued life and hope in the heart of winter.

The druids also chose holy for protection from bad spirits and esteemed it as a symbol for continued life and hope in the heart of winter. 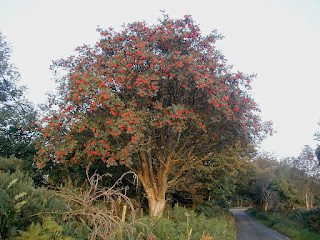 So while we’re waiting for the Oak King to prevail and bring summer once more, it’s a good idea to appreciate the hope and mysteries hidden in the red and green Holly Tree.