IS IT SCIENCE OR FANTASY? (or, There are more things in heaven and earth, Horatio, than are dreamt of in your philosophy.)

Rachael Harrie, who has created a most excellent campaign: htp://rachaelharrie.blogspot.com/ (may she live forever in the Kingdom of Bestsellers), has forcibly inspired me to define my novels’genre as something other than YA Time-Slip (because she doesn’t offer that category on her website).  So my writing is now officially Historical Fiction AND Fantasy, but leaning toward Sci-Fi.  This was an extremely difficult call to make, and here’s why:
Borrowing from my close, personal friends at Wikipedia, the standard definition that most of us abide by, is:
Stories that involve time travel devices or technologies that take people backwards and forwards in time and space are considered part of the science fiction genre.  Whereas stories that involve time travel through supernatural, magical, or unexplained means are considered part of the fantasy genre.
Isaac Asimov, when asked to explain the difference between science fiction and fantasy, once explained that science fiction, given its grounding in science, is possible; fantasy, which has no grounding in reality, is not.
“Ah-hah!” I cry, into the blogness, “But, Mr. Asimov, you have overlooked the realm of spiritual time-travel, which is an activity Druids (and other out-of-body specialists) have been indulging in for centuries.  What about Einstein’s theories of time and motion not being linear?  What about the ‘places,’ either within or outside of ourselves, that hold an energy of another time?”

I was in a film called ‘Contact,’ based on the Carl Sagan novel of the same name, in which Jodi Foster (as Ellie Arroway) does just this.  In the film, it looks to the outside world as though Ellie is just sitting in one spot.  But in HER consciousness, she goes to another place, 26 light-years away, and visits with someone who appears to be her deceased father.

Have you never had a very life-like dream of something from your own past?  Have you zoned out while driving and ‘found’ yourself at your destination?  Have you ever encountered a sort of waking vision that involves people or places you do not know?  If so, then I would suggest you have at least been on the threshold of time-travel.
So, okay, just because some people (maybe agents and publishers) sometimes feel more comfortable if things fit neatly into catagories, then I will categorize my current manuscript as YA time-slip ‘fantasy’ or ‘historical.’  But I will append this caveat to that pigeon hole:
Just because you can’t see it, define it or count it, doesn’t mean it’s fantasy, Heracio!

THE VINE MOON OF CELEBRATION

Ancient Celts and Druids lived their lives by the Tree Calendar, and tonight’s new moon marks the beginning of the Vine Moon, according to that system.
Today (Monday in Europe; Tuesday in the U.S.) begins a month-long period of celebrating the harvest (that can be a mental and emotional harvest too).  Whatever you have gleaned, learned, acquired or shared since the first of the year, now is the time to celebrate it.  I also look at this as a euphoric time to kiss the summer good-bye, like a parting lover, enjoying each moment as much as possible.
In Ireland, at mid-summer, it doesn’t get dark until 11:00 p.m.  Now, however, it’s dark at about 9:00 p.m.  Druids celebrated the beginning of a new day at sunset, instead of sunrise.  So, you might say the days are starting earlier!
If you are returning to school, now is the time to bring a small potted plant into your room, near a window.  When you water it, whisper a blessing and nature will help your mind grow as the plant does.
You might wish to celebrate this moon (month) by having a small gathering of friends over and making toasts to your accomplishments with champagne or sparkling water mixed with fruit juice.  If you have a garden, sharing what you’ve grown with friends is a lovely way to bind your souls with the strength of the Earth.
The only thing that can alter your psychological state almost as fast as drugs, is scent.  (It’s also cheaper and safer.)  Adding a few drops of mandarin essential oil or eucalyptus oil to an aromatherapy burner can enliven the spirit.  If you sit quietly for a few moments and breathe deeply of the scent, it can even help reverse depression.
Lastly, you might bring a bit of vine (ivy for resilience or blackberry for protection, etc.) into your home with an invocation that the magic of nature wend its way through your life.
Do you have any fun customs for the season?  If so, please join in the celebration and share.
Until we meet again . . .
Deep peace of the Sacred Grove to you. 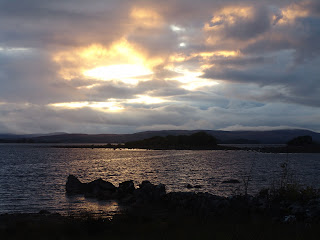