THE BIRTH OF A HISTORICAL NOVEL


This week I’m going to the Historical Novel Society Conference in St. Petersburg, Florida, where I’ll meet writer friends and mentors, some of whom I already know, and agents and editors I’d like to know.  Squeal!!!

The excitement for this conference has been building with stories from various authors of how they got inspiration and gave birth to their novels spanning all historical time periods.  If you’d like to take a look at some of those interesting stories, they are here:
http://hns-conference.org/

And this is the story of the birth of my manuscript . . .

THE MYSERIOUS ISLAND
My home is on Lough Corrib, the largest lake in the Republic of Ireland.  Sir William Wilde (Oscar Wilde’s dad), wrote a book about the place in 1867, Wilde’s Lough Corrib, in which he claimed the lake (lough) has 365 islands.  God only knows how he counted them all.

The largest of these lake islands is Inchagoill (meaning Isle of the Foreigner or Isle of the Stranger), so called because when the Christians first came to this island in the 5th Century, they were foreigners, and definitely strange.  Inchagoill is remote, beautiful, achingly peaceful.  Regularly shrouded in mist like a Japanese painting, this island is a forest with huge, old trees, hanging vines, ferns and moss-covered rocks.  Though no humans live here, there is a mysterious, ‘busy’ energy about the place . . . A place where, ‘earth and air resound with the music of invisible people.’  This is where my story, THE PATH THROUGH THE MIST takes place.
On Inchagoill, a clearing in the forest marks the spot of the original 5th Century Christian settlement.  There are also ruins of two tiny temples from the 9th and 12th centuries. 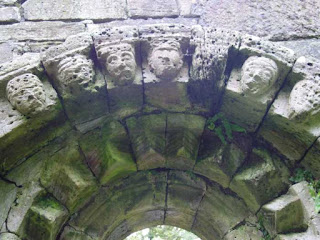 A stone with ancient Ogham-like hieroglyphs marks the 5th Century grave of Lugna, St. Patrick’s nephew, who brought the first Christian monks to this island. 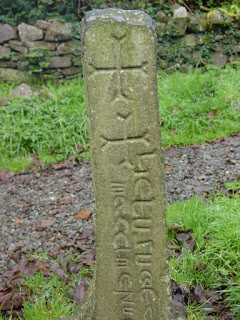 While these are interesting things to see, the true beauty of the island lies beyond these remains.  If you venture into the forest and walk around the island to the other side, you find that the land rises and becomes an unnatural, seemingly man-made hill, with a shallow ditch around it, in just the way the ancient Celts used to build duns or hill forts.

On my first visit to the island, I stood upon this hill, looked out over much of the enormous lake and felt more than thought, “This was a non-Christian settlement.”  Images and sounds came to me of robed and hooded figures round a fire, drum beats, chanting.  It felt like I was standing in an ancient, holy place and I stayed on the island a long time, listening to the sounds of the invisible.

HISTORICAL C.S.I.
Once the idea for a story came to me, I began the long, involved process of researching a time before things were written down.  Every historical and geologic source I consulted claimed that Christian monks were ‘banished’ to this island by the local people.  Some said they were banished by Druids.  But that made no sense.  Druids frequently lived apart from local tribes or clans.  They would have preferred to live on the island, near water -- especially surrounded by it -- for water would have been considered a gateway between this world and the next.  The dun fort would have been indicative of a native (non-Christian) tribe of people inhabiting the opposite side of the island from the Christians.  It seemed to me that all the evidence pointed to Druids living on this island first, before the Christians took over.

Interviewing local historians, I found they had two things in common:  They were all male and all well over the age of 50.  All were Catholic with the exception of one Protestant Archdeacon who’d written a book on early monastic sites.  Without exception, each historian said they did not know about the hill fort on the island, or they passed it off as ‘the natural lay of the land.’

I couldn’t help wondering if all these historians had a revisionist view of ancient history inspired by their religious up-bringing.  Maybe I was crazy – just imagining Druids there because it would make a good story.  That prodded me to keep investigating.

Finally, the author of a book on local history recommended I go see ‘Joe.’  “He’s a crazy, old guy, now, he might frighten ye.  But he can certainly offer ye another point of view,” the author told me.  Friends told me I shouldn’t go visit Joe.  “He’s a recluse, a frightening lunatic.  Best mind yerself, now.”  There was never any mention of why, exactly, he was thought of in such a negative way.

It took some work, but I located Joe and drove through impenetrable fog to his house.  He looked to be about 80-something and described himself as a ‘Devout Pagan’ and ‘Reformed Catholic.’  His face was creased with a perpetual frown, but he invited me in to his smelly, old house and we sat in a tiny room that was wall-to-wall books.  There, we huddled next to the radiator, along with his Winnebago-sized German Shepherd.  Like a man who’s been alone for too long, Joe talked and talked.  He told me the history of the area and of his family.  He said things like, ‘local holy wells were sacred long before the word ‘holy’ came to this country,’ ‘ley lines cross this whole area like spider webs.’ He even offered to teach me how to douse.  When I asked him about the hill fort on Inchagoill and if maybe there were Druids on that island before the Christians came, he fell silent.  Glaring at me from under his bushy eyebrows, he resembled that ‘lunatic’ people had warned me about.  But then a slow grin spread across his face.  “Yer the first person’s ever said that to me.  Sure the Druids were the first.  We all know it, don’t we.  Just most of ‘em’s round here won’t say it. Cowards.”

Joe twitched his head.  “The church has always covered up these t’ings, ye see.  They’ve ruined this country, the Catholics.  Besides, if we’re right about this, that wouldn’t serve their purpose a’tall, now would it?”

Of course, Joe’s declarations don’t completely confirm my intuition, but his beliefs did make me feel a little less alone.  Best of all, his input gave me the courage to finish writing this manuscript, and he is now a character (renamed, of course) in that story. 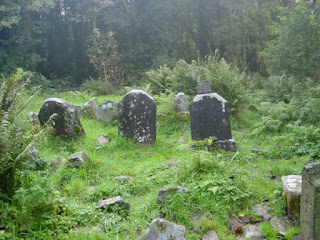