THE MAGICAL TWILIGHT OF SAMHAIN – Part 1

“This quiet dust was gentlemen and ladies, and lads and girls, was laughter and ability and sighing and frocks and curls.”  - Emily Dickinson
Understanding the Significance
From early times, and still today in Celtic countries, children born between the months of October and November are believed to possess special attributes.  According to the famous seanachie, Eddie Lenihan, they are ‘touched by the faeries.’  That doesn’t mean those of us born in October and November are crazy (necessarily); it means we’re likely to have some sort of psychic ability, especially the ability to see spirits and/or faeries.  I believe everyone has this ability, especially at this time of year, when twilight quickens, shortening the days . . . When the veil between the living and the ‘dead’ gets so thin it’s almost non-existent . . . When, whether we realize it or not, we’re right up close and personal to those who have left their bodies.
I object to the word ‘dead.’  To me, there is no such thing.  Once we leave our body, our energy merely changes form and moves on.  I’ve had loads of experiences with departed loved ones who send love or do favours, with acquaintances who just stop by, and even with total strangers who’ve helped me write books.  All these experiences have led me to believe that we don’t go far when we leave our bodies.  In fact, we’re just around the corner, so to speak.
The name of the upcoming holiday of Samhain (pronounced ‘Sow-ihn) comes from two Irish words meaning ‘summer’s end.’  On my calendar, the month after October and before December is referred to as ‘Samhain,’ so its current definition is ‘November.’  But Samhain is really a season of its own, and we’re in the midst of it now.
Make An Appointment
Years before my mom passed away, we made an agreement.  Whichever one of us was to ‘leave’ first, we’d come back and visit the other and give some idea of what ‘death’ was like.  My mom has kept this agreement, over and over again through the years, visiting and always surprising me in the most amazing ways.  I highly recommend that you make verbal agreements with all your loved ones.  It isn’t necessary, but it makes this process a lot easier for the one who remains in physical form.
Contact
If you want to contact someone who’s no longer on this planet, sit in a darkened room and light some white candles.  Meditate until you feel centered and calm (with no music, T.V. or distractions).  If you have a specific question, ask it aloud and/or write it on a piece of paper.  Let the candles burn out on their own and go to bed.  In the morning, when you wake up, if the candles are out but have not burned down completely, you should consider that a form of response.
Responses can come in a variety of ways:  synchronicities, waking dreams, unusual sounds, smells, and most frequently, electrical interruptions.  Most importantly, they probably will not come right away.  It may take hours, days or weeks.  For me, it often takes 24 hours and then there is a seemingly miraculous response.  Next week, I’ll give a couple of examples.
In the meantime, I would suggest you might want to practice making contact between now and October 31st.  You never know, all sorts of wonderful things may happen.  There is only one constant:  Love will always defy death. 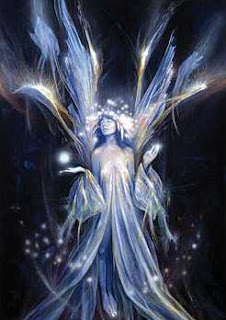