Pilgrimage to the Eternal Flame

Last week, I went on a mini-pilgrimage to the other side of the country to visit Kildare (in Irish, Cill Dara or church of the oaks).  Appropriate for a druid, don’t you think?

I went to research Brigid, first a Goddess, then made a saint by the Christians, for another novel I plan to write. 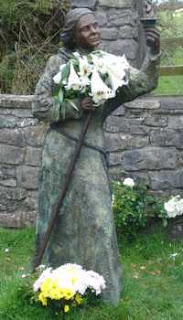 Before Brigid was a saint, she was just your typical female trinity deity.  The great Celtic empire of Brigantia (including Britain as well as Spain and France) worshipped her as a goddess of healing, poetry and, mostly notably, flame (and, by extension, smithcraft).    Since the Goddess Brigid was worshipped by many across Europe, it stands to reason that many females were named after her in various dialects (Bríd, Bridie, Bridget, Bree, Biddy).  In later centuries, the name was so frequently given to Irish girls that many who went to America and became maids were automatically called Biddy (no matter what their actual name was).
One Brigid, born approximately 450 C.E., loved the Goddess Brigid so much that she became part of a female priesthood who kept an eternal flame burning in honor of the Goddess.  Years after her death, this woman was to become a saint.  It’s her life that interests me, for she must have been a remarkable woman – a devout Pegan Christian.  Someone who worshipped the Goddess and the old ways, while extending her worship to include the ‘new’ Christian faith.  In this way, she worked to unite the warring factions around her.  The legends that surround her life are fascinating and mysterious. 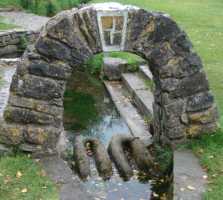 Last week, while gathering material, I interviewed two ‘Brigidine’ nuns who have been the most recent keepers of the not-quite-eternal flame (which was re-lit in 1993).  I also visited the castle, the holy well (which was holy long before Brigid’s time in the 5th Century) and the wishing tree, where hundreds of pieces of colourful ribbon, cloth and even an old sock, were tied by people making wishes.  For good measure, I lit a candle in the shrine to this Goddess and patron saint of poetry, because I figure she wouldn’t discriminate against a writer of prose. 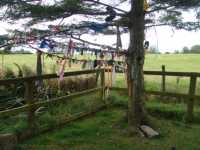 It was an enlightening journey, and one I know I’ll make again.
Until next time, deep peace of the sacred grove to you.
Posted by Fiona Claire