Say what you will about our ravaged economy, any country who elects a poet for president can’t be all bad.

While more than a few U.S. Presidents have written books, they all did so after being elected.  Michael D. Higgins, the newly elected president of Ireland, has published several books (of poetry), and gifted me with copies, long before he was elected.
Political parties aside, there is a feeling of long-term solidarity in this latest choice made by the people of this old island.  If we were still living in a druid society (and some of us are!), it would be only natural for a filí to be considered a lawgiver/poet/magician.  Filí was the ancient class of druid poets and they were the most revered class, for they could work magic with their words.  Primarily, they held the knowledge of the complete history of their tribe and, in many cases, the history of Ireland in general.  As knowledge was considered sacred, nothing was written down.  EVERYTHING had to be held in the head, meaning that a poet memorised vast amounts of information and recited it whenever the occasion arose.  Naturally, if you have a lot of facts to memorise, it’s easier if you can make a rhyme out of it!
More so than any other culture or society in the history of the world, ancient Ireland accorded poets the most supreme rank available.  Poets paid no taxes and were exempt from military service. They had a freedom of movement to cross political borders denied even kings, and wherever they travelled they were entitled to the best lodging. 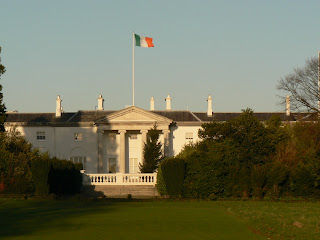 Aras an Uachtaráin, Irish President’s Residence
In the filí tradition, poetry, music (harp playing), mnemonics, improvisation, quick wit, creative hyperbole and clever kenning were necessary attributes.  All things a modern politician might require.  Above all, though, was the great importance the ancient culture placed on a filí’s ability to pass on stories and accurate information to the next generations, without changing facts.  Now, THAT is a talent all politicians could acquire.
Posted by Fiona Claire