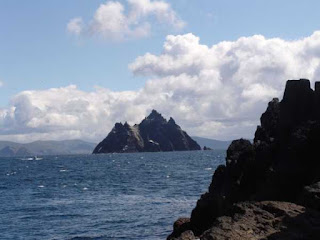 True Confessions:  I did not reach my Nano goal last month, although I did write about two-thirds of my novel, and I believe it’s a useable draft (not just words for words’ sake).  You know how you can get in that ‘groove’ and the words come like water from a faucet, too fast to get them all down?  Yeah, I love that place.  And I haven’t been there in weeks.  I am writing each day, but it’s a wimpy word count.
My writing partners (bless them) tell me the well has run dry and I must go out and replenish the muse.  Mary and Tammy both said they sort of make up stories in their heads to put themselves to sleep, and this helps when their muse is sluggish.
So, I’m remembering a true story of a place just south of here that I visited not long ago.  Here’s hoping it will help me get back in the ‘groove,’ and in case any of the rest of you are in a post-Nano slump, I hope this story will inspire you too.  If you have Loreena McKennett’s cd, ‘The Book of Secrets,’ you might want to play track 3, ‘Skellig’ for atmospheric background while you read this.

Way out in the Atlantic Ocean, off the coast of County Kerry, lie two lonely rock islands, shaped like pyramids.  The larger of the two, Skellig Michael, was a hermitage site founded by monks in the 7th Century.  Imagine, if you will, a small group of men wearing long dresses (monks), rowing tiny animal-skin-covered boats nine miles out into the ever-tempestuous sea and somehow climbing a jagged, vertical rock 250 meters to the top.  Then, they would have had to hollow out stones to collect drinking water (those stones are still there today), climb down the 250 meters to catch fish to eat, chisel away rocks and stack them to create their small clochans (dwelling huts).
Today, there are only a handful of motorized passenger skiffs that will risk the trip out to Skellig Michael and ONLY if the sea is fine and quiet.  It’s a harrowing journey at the best of times.  On the sunny summer day when I made the journey, our boat was tossed about by near 20-foot-waves for nearly an hour.  I was certain it was going to capsize.  Luckily, it didn’t.  When our boat was finally close enough so that I could really see the island, it was actually glowing in the sunlight.  An overwhelming feeling of . . . something – I’m still not sure what – came over me and I began to cry.
Some say this rock is part of a layline that connects with sacred energy sites in England and France.  After visiting the site in 1910, George Bernard Shaw wrote, ‘An incredible, impossible, mad place. I tell you the thing does not belong to any world that you and I have lived and worked in; it is part of our dream world.’
When our boat landed, I climbed the near-vertical slope, huffing and puffing, to the top of the rock.  A man climbing near me stopped to catch his breath.  He shook his head and said, ‘Oh, these lads were not the full shilling.’  I panted back, ‘Truer words were never spoken.’  In fact, in recent years, several tourists have died trying to make this climb.  It does leave one scratching one’s head, wondering why the monks would want to do this. 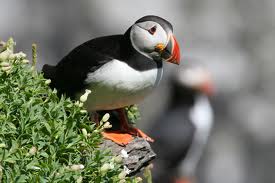 On the way to the top, the rock was carpeted with the usual florescent green associated with Ireland, and scattered with a beautiful array of tiny wildflowers.  Here and there, nesting puffins – adorable little birds that purr like cats – moved closer to get a better look at me.  Males and females take turns guarding their nests and they seem to get board with their duties and so checked out this passing human with avid curiosity. 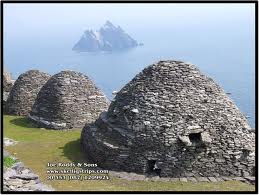 At the top of the many, many steps the monks chiselled into the Devonian sandstone that sparkles with sedimentary quartz, lies a colony of clochans and a tiny church.  The monks brought seaweed and soil from the mainland and made gardens and even bannocks (or flatbread).  The views from every angle are amazing and create a feeling of limitless space.  Needless to say, the energy in this place throbs with something magical, spiritual . . . indefinable. 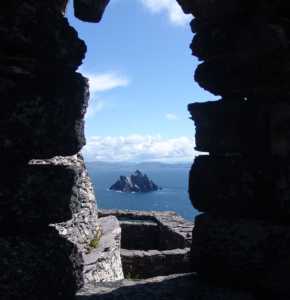 Sitting alone at the top of this rock and listening to the wind, is indeed a mesmerizing and humbling spiritual experience.  Irish monks were never persecuted like Roman Christian monks.  Since their Roman brethren were being crucified, boiled in oil and fed to lions, the Irish monks felt they too should experience some sort of sacrifice.  So they became ‘green martyrs,’ exiling themselves to remote outposts like this one, in an effort to bring themselves closer to the essence of God.
So, maybe those ancient monks were several shades of crazy, but I can’t help thinking:  If they could do ALL that, then I should be able to write at least one chapter today.
Until next week,
Deep Peace of the Sacred Grove to You 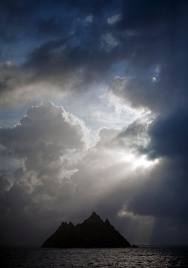