A FERTILE GODDESS OF CREATIVITY

If you lived in Ireland hundreds of years ago, you might have, as protection over your front door, a figure of a naked woman, squatting down and holding her – uh – pink parts open for the world to see.  No, really, it’s true.  This isn’t an x-rated post; it’s just the facts, ma’am.  And it gets better . . . 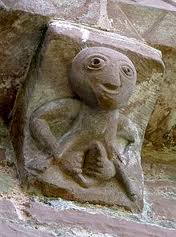 Sheela-na-Gig is the Anglicised version of Síla-na-Ghig.  Síla is the Irish spelling of Sheila but could also be, in this instance, Sidh (pronounced ‘shee’), meaning a female faerie.  Ghig (pronounced ‘gee’, with the ‘g’ as in go) is Irish slang for a woman’s genitals.

And, why, you may ask, would anyone want some crouching, ugly hag to rudely display herself over their door?  For good luck, fertility, protection and inspiration, of course!  Yeah, I know, those crazy ancient Celts were nothing if not imaginative.

It helps to consider this from the historical perspective.  The Irish Cailleach goddess or ‘Old Woman,’ gave birth to all things, including Man.  So, generally speaking, Celts protected their doorways with some female genitalia fetish in honor of the Goddess.  Sometimes it was the classic Omega sign over a doorway, which evolved into a horse shoe.  If you look closely at a Sheela-na-Gig, you will notice that she is always crouched in a sort of horseshoe position.
The usual place you will come upon a Sheela-na-gig is on an old church in Ireland.  Lots of churches have them.  Ages ago, if you were building a church, you would put one of these squatting naked women over the south-facing door or wall of your church.  She would protect your building’s opening with . . . her opening, so to speak.  The south-facing door would be the best location for rebirth in the Northern Hemisphere, as it gives the longest period of sunlight to fall on the opening of the carving. 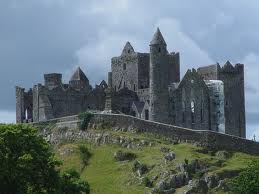 At the magnificent Rock of Cashel, the bishops and clergy who lived there had no less than three Sheela-na-Gigs gracing their walls. 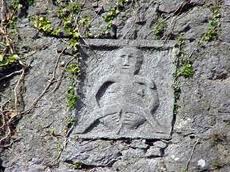 If you were entering the town of Fethard, Co. Tipperary, via boat (as this was the only access into town in medieval times), you would pass right under this Sheela in the old town wall overlooking the ford and the bridge.  So she was kind of like a medieval ‘Welcome to Fethard!’ sign. 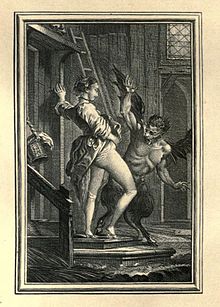 In later, Victorian times, Sheela-na-gigs were thought of as similar to gargoyles - carvings meant to scare off devils and evil spirits.  That’s probably because those poor old Victorians were so messed up about sex.
I have my own personal Sheela-na-Gig, whom I like to think helps me with all things creative.  My friend, Tony Fazio, a brilliant sculptor, made her.  His designs can be seen here:  http://www.fazioartinstone.com/.  The Sheela Tony made for me is much more attractive than those old Sheelas and he added gold leaf at her opening to symbolize, ‘the birth of inspiration.’  Behind the sculpture, I usually have a lit candle for added positive energy. 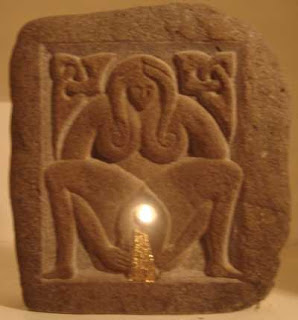 I like to think those ancient Celts would be happy to know their Sheela-na-Gigs are being transformed by modern artists into attractive Goddesses that still symbolise the good luck they originally did.
From Sheela and I:  Good Luck in all your creative endeavours!
Posted by Fiona Claire