Incredible Irish Legends Based in Fact

Remains of the earliest human habitations in Ireland, dating from the beginning of the Stone Age, have been found in quite a few places around the country, but principally in Antrim (in Northern Ireland) and Sligo (the county just to the north of me). 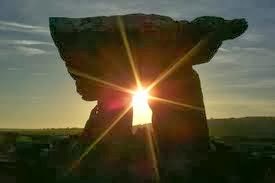 However, all over the island, farmers digging for turf in the boglands, as well as archaeologists looking for historical treasures, have found innumerable artefacts of stone, bronze, gold, silver and bone, all of them relics of the Stone, Bronze and Iron Ages. Many of these artefacts are in museums. Some are on bookshelves, or proudly displayed on a mantle, or maybe lying forgotten under a layer of dust in a shed. The earth of this country seems to spew up ancient objects the way a human might spit cherry pits. And these objects tell amazing stories.

Walking over a natural bed of shimmering quartz crystal, climbing to the top of an ancient cairn (burial hill) a mile from my house, or picking up fossils from the lake shore—these are things that send my mind on wonderful journeys to the past. So many Irish legends are tied to the land and, even the legends that sound the most far-fetched, have a grain of truth to them. When I take the trouble to trace them back to their origins, there’s always an ‘Aha!’ moment. This really could have happened.

Here’s an example . . .
Early Annalists recorded invasions and settlements of the island of Ireland carried out by such tribes as the Parthalonians, Nemedians, Formorians, Fir Bolg, Tuatha de Danann, and finally the Milesians or Celts. The Milesians came on boats from what we think of as ‘Spain’. They introduced implements and weapons of iron to Ireland for the first time and overcome all previous settlers still existing. The iron weapons made it that much easier for them to subdue any and all opposition. These same Celts also brought with them a Celtic language of their own, which would later develop into Gaeilge, or the Irish language which we know today. Looking at it that way, Irish is just another version of Spanish.

The strangest of the early tribes to settle here was surely the Tuatha de Danann (or ‘The People of the Goddess Danu’), who were supposed to be able to understand magic. These are the people who have been associated, more or less, with the Sidhe, the Fey or Fairy Folk. Their amazing tales and deeds were recorded and have come down to us through the ages. You’ll want to remember these folk now, the de Dananns, because whatever or whoever these early settlers were, they have left an astonishing legacy of megalithic tombs, court cairns, dolmens, tumuli, etc., dotted all over the country.

Perhaps the most remarkable structure they left is the enormous tumulus at Newgrange in Co. Meath, which covers an acre of ground. Newgrange dates from 3500 BC, which makes it much older than either the Pyramids of Egypt, or Stonehenge in England. Only a fraction of these tombs and tumuli have been unearthed and explored over the years. 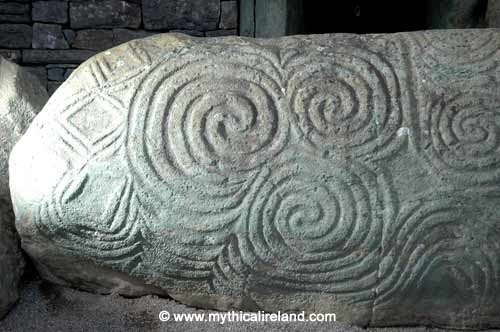 Some of the stones at Newgrange are beautifully decorated with swirling designs that are thought to represent unending life. Ancient Celts and Druids believed that life began, ended, and began again in a continuous process of reincarnation.

In a display of frighteningly accurate astronomy, these ancient construction workers (likely the de Dannan) built Newgrange so that every single year on the winter solstice, the light of the rising sun would penetrate the structure, travel up the 19 meter passage and dramatically illuminate the very centre of the cruciform crematorium at its heart. To Druids and ancient peoples, the winter solstice would have been a terrifically powerful day, a day when the sun was ‘reborn,’ causing each day after the solstice to be a bit longer. This must be the reason why they made the passageway look like a birth canal. 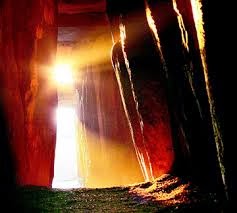 This phenomenon attracts hundreds of visitors from all over the world on the 21st of December every year. 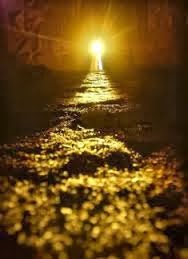 Building Newgrange, and the other passage graves around the country, was a mammoth undertaking and would have required a great deal of labour over a prolonged period of time. But there is no evidence of a large-scale settlement such as would explain the organisation and sophistication indicated by the tombs. So these people of the Middle Neolithic/the de Dananns remain an enigma.

There are tombs all over Ireland—as far away as Northern Ireland and Sligo to the north, Kilkenny in the east, and Dingle in the southwest. They appear to maintain an exact geographic alignment. That alignment is not necessarily with the astronomical points of solstice and equinox, but with the other tombs.


This indicates that the influence of those who built at Newgrange must have extended over vast areas of Stone Age Ireland. According to Prof Muiris Ó Súilleabháin of the school of archaeology at University College Dublin, ‘The network of passage tombs across the countryside, reinforced by the alignment patterns, suggests extensive social control on the part of those responsible for the passage tombs.’

There are hundreds of legends and stories of the Fey controlling humans, manipulating time, playing ‘tricks.’ It isn’t a great leap to suppose that those same Fey or de Dananns, might be the Middle Neolithic people of Ireland who somehow crafted a complex web of structures across the island, meant to honour the passage of time.

Over the years, I’ve visited Newgrange on a number of occasions. It’s a major tourist destination, like Disneyland or the Eiffel Tower, so any archaic spiritual energy the place might have held has been washed away by years and years of camera-wielding humans. But the mystery behind the creation of the place lives on, as do the stories of the magnificent de Dannan. It offers a world of speculation for writers.
Posted by Fiona Claire