One of the first lessons in Druidry concerns Imbas, the Irish word for inspiration.  The lesson includes heeding your intuition, which is of course, fed by inspiration and vice versa.
Several years ago, I visited a mysterious lake island and was inspired to write a story that forced me to listen to my intuition.  My intuition, of course, was completely opposite of the local view of accepted logic.  Funny how that works, huh?

THE MYSERIOUS ISLAND
My home is on Lough Corrib, the largest lake in the Republic of Ireland.  Sir William Wilde (Oscar Wilde’s dad), wrote a book about the place in 1867, Wilde’s Lough Corrib, in which he claimed the lake (lough) has 365 islands.  God only knows how he counted them all.  The largest and most famous of these lake islands is Inchagoill (meaning Isle of the Foreigner or Isle of the Stranger).  And this is where my story, THE PATH THROUGH THE MIST takes place. 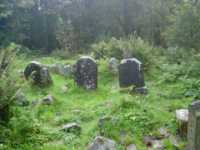 Inchagoill is about a half hour boat ride from my house, and I’ve been there on numerous occasions.  It is a beautiful, achingly peaceful island, forested with huge, old trees, hanging vines, ferns and moss-covered rocks.  A place where, ‘earth and air resound with the music of invisible people.’  It is completely devoid of humans (except for the odd boatload of tourists who spend about 10 minutes on the island for a brief tour). 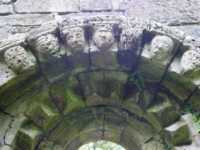 Their tour visits one spot only – a clearing in the forest which was a Christian settlement, where there are the ruins of two tiny churches right next to each other (circa 9th and 12th centuries) and the 5th Century stone that marks Lugna’s grave (St. Patrick’s nephew). 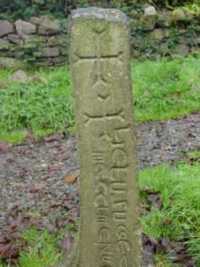 While these are haunting and interesting things to see, the true beauty of the island lies beyond these Christian remains.  If you venture into the forest and walk around the island to the other side, you find that the land rises and becomes an unnatural, seemingly man-made hill, with a shallow ditch around it, in just the way the ancient Celts used to build duns or hill forts.
On my first visit to the island, I stood upon this hill, looked out over much of the enormous lake and felt more than thought, “This was a non-Christian settlement.”  Images and sounds came to me of robed and hooded figures around a fire, drum beats, chanting.  It felt like I was standing in an ancient, holy place and I stayed on the island a long time, listening to the sounds of the invisible.
Even before I got back home, I knew there was a story here I had to tell . . .
[Come back tomorrow for Part 2!]
Posted by Fiona Claire